3 things for which I’m not thankful 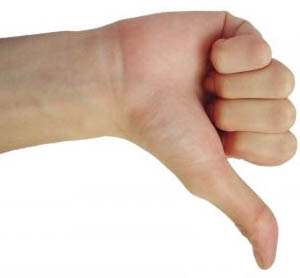 It’s the season of giving thanks. I’m blessed beyond anything I deserve. I’m overwhelmingly thankful for my life. However, today I say “bah humbug.” Today, here are 3 things I’m not thankful for. >>>>Begin rant…

1. The “Super Committee.” These guys had nearly 4 months to accomplish the oh-so-difficult (yep, that’s sarcasm) task of trimming our country’s bloated budget by approximately 4% (based on our current spending). As of today, they still haven’t figured out how to do this. Embarrassing. Here’s my proposal: cut the salaries of everyone on the “super committee” by 50%. Task them with reducing their personal expenditures by 4%. I’ll bet they can figure out a way.

3.  Did I mention the super committee? The nation is begging for a return to fiscal responsibility. Our estimated deficit for this year alone is over $1 trillion. They were asked to cut $1.5 trillion over 10 years and they couldn’t do it. Yes, I’m aware that $1.2 trillion of cuts automatically go into effect should they fail as expected. My point is that these guys are so detached that they don’t have the same sense of urgency as the rest of us.

Do you know what I think would’ve been cool? If, a month before the deadline, these guys had presented the president with a list of cuts totaling $3-$4 trillion. If I’d been on this not-so-super committee, I would’ve worked 100 hours/week to make that happen. I bet these guys spent one day crafting an elaborate excuse and the rest of the time Wii bowling or playing Go Fish. “Our nation is in financial crisis, but more importantly, do you have any sevens?” “Go fish.”

Is Black Friday shopping worth it? I’ve devised a formula to help you find out.

Part 2: I’m not so unlike you, Occupy Wall Street Protesters

Why I disagree with Occupy Wall Street (rant inside)