Reminiscing: what some topless women taught me about public speaking 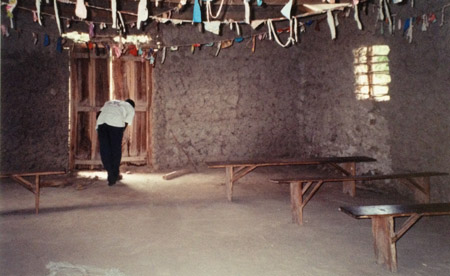 The year was 2001. I found myself sitting in the middle of a little church in the middle of a little village in the middle of nowhere in Kenya, Africa. We were miles from electricity. The church was a small building made from sticks and mud. With the exception of a few people, everyone was standing because there was not enough room to sit. A decent-sized group of people stood outside, listening through the windows. About 45 minutes into the church service, my guide/interpreter gently elbowed me in the side.

Him: “You’re preaching. Get up there.”

Apparently, when visiting a remote village in Africa, it is often customary for the guest to preach during the service. This would’ve been useful information to have had prior to the service. Oh well. Seeing no other option, I walked on up to the front.

I opened my Bible and begin reading. Frankly, I don’t even remember exactly what I read. I do remember that I initially avoided eye-contact with the congregation. Why? Well, I was nervous; but, there was another reason. You see, most of the women in the congregation were topless. Seriously. National Geographic topless. Looking up from my Bible to a room that was partially filled with smiling, topless women was a wee bit distracting. So, I planted my nose in my Bible and read. Before the interpreter had a chance to interpret anything that I said, I heard a loud voice shouting from the congregation: “BWANA ASIFIWE!” (that’s Swahili for “Praise the Lord!”)

Whoa. I looked behind me, thinking that perhaps Jesus had returned and I was missing it. Nope. No Jesus. Then, I looked out at the congregation. Every person in the room (both topless and clothed) was smiling at me with gigantic smiles. It dawned on me that these people–all of them–were so genuinely excited to hear a random guest speak that they couldn’t contain it. So, I kept reading. Then, I talked a bit. About every 30 seconds or so, I was interrupted with “BWANA ASIFIWE!” or “ASANTE YESU!” (Thank you, Jesus!). I got more animated. I raised and lowered my voice. I waved my arms when making a point. I came out of my shell. I made eye contact. It was awesome.

I don’t remember what all I said that day, but I remember this: the content of my sermon was bad. Not theologically bad, but “bore you to sleep” bad. I’m not just saying that to be modest. It was dull as bricks. Yet, it was the most fun I’ve ever had preaching a sermon. I was energized because the congregation was excited. Their excitement was contagious.

The moral of the story: we’ve all sat through bad speakers, preachers, or presenters. Sometimes, a speaker needs a bit of help getting out of his or her shell. Be a better audience member. Liven things up a bit. Clap. Make a positive comment. Say, “AMEN!” You might be surprised at how a few small comments can transform a boring speech into an energizing interaction for everyone.

5 Facebook marketing tips I learned while promoting my book