Since my original Craigslist listing expired, I’ve been asked to provide a permanent link to the ad. Here you go. I leave this here for anyone interested. Yes, the van was sold! And, yes, I’m still working on the book. More to come soon! 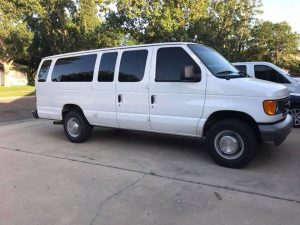 We’re selling our 2005 Ford E350 XL Extended 15 passenger van. Photos attached. In the interest of full disclosure, here’s more information and a partial list of its issues. Please read before making an offer. Thanks!

The van is missing a speaker in the side door. My kids have been throwing random items in the speaker hole for years. So, you may end up with some very special treasures. Or really old chicken nuggets. Probably both.

My wife and I have used this van for the better part of a decade. We’re a lovely couple, but we sometimes inadvertently back into inanimate objects. Also, we’ve been forced to take defensive driving class a few more times than the average American. That said, there are a number of other minor scratches, dents, and places where the paint is chipped on this vehicle.

When you open the side doors, the rubber door liner is detached in some places. It still does its job, but it looks stupid.

The van came equipped with automatic door locks. Unfortunately, they no longer work. Somehow, something got reversed and the locking motor ran without ceasing until the button was pressed and held down. Rather than taking the van to a repair shop like a normal person, I duct taped the button down to keep the motor from running. At some point the duct tape failed and the motor ran until it eventually burned up or something. Anyhow, the automatic door locks don’t work. Each door must be locked and unlocked manually. Duct tape is not included.

We’re a family of 11. Every one of our children has thrown up in this van at some point in the past decade–most notably, on this trip: http://www.joshwoodtx.com/college-station-2015/. We have had the van detailed a couple times since then (shout out to Xtreme Auto Re-Styling Center for tackling a level of depravity unrivaled in the world of passenger transport.) The van is clean now; but, it will probably always be inhabited by the ghost of vomit past.

The automatic windows work! This is good because the air conditioner does not. Well, it sort of works and sort of doesn’t. It works fine until you accelerate past ~45 miles per hour. After that, the gas pedal essentially functions as an on/off switch for the air conditioner. Accelerate = AC off. Decelerate = AC on. I don’t understand why. But, then again, as you’ve probably gathered by now, I don’t understand most things about cars.

The windshield is cracked.

There’s a 20″ tv mounted to the ceiling. It works and is connected to an in-dash DVD player. This is a handy feature as it helps distract kids from the intermittent air conditioning and smell of decaying chicken nuggets.

I don’t think that the front speakers work. Actually, just assume that they don’t. Better yet, if you’re wondering if some particular part of the van works, just assume it doesn’t work in the way that Ford originally intended it to work.

I looked the van up on Kelley Blue Book. $4,396. Unfortunately, Kelley Blue Book only allows me to choose between the following conditions: excellent, very good, good, and fair. I chose “fair” since “sad” was not an option. I’ve adjusted my asking price accordingly.

The heater works. Also, the van has a hitch and wiring for a trailer.

In order to save myself a bit of time answering requests for more information, I’ve decided to add a FAQ section below:

Q: “Have you performed all proper maintenance and religiously changed the oil every 3,000 miles?”

A: Well, a lot of them are. However, we’ve been using this van as our farm van for the past year or so. Also, in efforts to find quicker routes, I’ve been known to disobey Siri’s directions. These “shortcuts” have sometimes taken us on exotic, off-road adventures. I’m pretty sure those miles cancel out all of the so-called “highway miles.”

Q: “Is the registration current?”

A: Yes! It should be noted, however, that first 3 letters of the current license plate are FRT. We have five boys under the age of 12 in our house. This is a very unfortunate combination.

Q: “How are the tires and the brakes?”

A: They seem to be ok; but, as with everything else, I recommend getting them checked out. I did buy the tires at Discount Tire, so there’s a warranty with them.

One last note: I recommend getting this thing checked over by a mechanic before buying. Everything under the hood looks and sounds fine to me; but, then again, I would have no idea if it didn’t look or sound right.

Previous post A story for you runners out there (excerpt from The Struggle Bus book, Chapter 4: It Still Does Its Job, but It Looks Stupid)

For you runners out there: Amarillo Run Maps