A story for you runners out there (excerpt from The Struggle Bus book, Chapter 4: It Still Does Its Job, but It Looks Stupid)

For anyone interested, here’s an excerpt from the book I’m working on. Yes, I’ve devoted an entire chapter to “It still does its job, but it looks stupid.” Enjoy. Feel free to send me some feedback and share this with any runner friends who might appreciate it.

There are individuals in this world who are exhausting. They never follow through on commitments. You can’t count on them. They seem to live their lives in constant states of drama, excuses, and annoyance. These people can’t be trusted. When these people say something like, “Hey, I’m going to [insert name of some adventure]. Are you interested?” you reply, “No, thank you. I’d rather not end up alone, dead, or miserable.” You avoid adventures with these people because you know that even if their plan sounds great, you’ll end up exhausted or annoyed or both.

Fortunately, there are other individuals who are the opposite of the exhausters. They’re generally wonderful. They follow through on commitments even if it costs them dearly. They can be trusted. When these people say something like, “Hey, I’m going to [insert name of some adventure]. Are you interested?” you blurt out, “Yes! I’m in! Wait, what was the question? What are we doing? Never mind. It doesn’t matter. Let’s go!” You go on adventures with these people because you know that even if you fail, somehow and some way you’ll end up having a ton of fun. In 2017, a good friend of mine—who happens to be one of these good people—asked if I would be interested in running a marathon with him.

“I’m in!” I replied, without giving it a second thought.

The first week of training was a blast. I researched. I found a training plan on the Internet. I bought some sweet HOKA shoes. I bought nine flavors of gel packs, a bottle of electrolyte pills, and some Gatorade. I started a three-month trial of Apple Music and created an awesome playlist consisting primarily of songs recorded prior to 1998. Michael Jackson. Tupac. OutKast. Red Hot Chili Peppers. Metallica. AC/DC. Nostalgia was my guide. If you tossed a CD in a fire at a church youth rally in the mid-’90s, I probably had at least one song from said CD on my playlist. After work, I ran two to four miles per day. Running was a relaxing diversion from the day-to-day grind. This was going to be great!

Then weeks two through 30 came. As it turns out, training plans for marathons require you to run a lot more than two to four miles per day. A. Lot. More. Within a week, I had tried all nine gel pack flavors—all of them tasted like disappointment. A couple days later, I exhausted my supply of Gatorade and was too cheap frugal to spend money to buy more of the stuff. As if to add insult to injury, my music selection wasn’t making me happy anymore. As it turns out, there was a reason youth pastors across America were encouraging people to toss CDs into bonfires. Tupac, while a lyrical genius, was quite a potty mouth. I cancelled my Apple Music subscription and went back to my pre-training listening regimen of sermons and audio books. No, they weren’t as fun to run to, but I no longer had a nagging feeling that I was somehow disappointing Jesus.

Now that I was no longer propelled forward by expletive-infused tunes with catchy beats, my increasingly longer training runs were growing increasingly boring. In an effort to break up the monotony, I took to using my Nike app and GPS to run in shapes. Apparently, this is a thing that other people do as well (google “running in shapes” for some creative examples). First, I ran my route in the shape of a guy who had collapsed on the ground. It was a work of GPS art imitating life—or something. I ran the same route many more times, adding accessories to my GPS man—a hat one day and a failed attempt at a soccer ball another.

A couple weeks later, I mapped out a way to run in the shape of GPS man playing with a yo-yo. It would require me to run across a large, undeveloped lot in the neighborhood, and that would be an added bonus (running on paved roads gets old). Unfortunately, my GPS yo-yo man run was ill-timed. As I was running the path that would create the yo-yo string from the yo-yo back up to the yo-yo man’s hand, a sheriff’s SUV hopped the curb about a hundred yards away and sped toward me with his lights flashing. Uh oh. A number of thoughts quickly crossed my mind.

“Is it illegal to run across this undeveloped land?”

“This is totally going to mess up all my GPS hard work.”

I stopped mid-stride, walked toward the oncoming SUV, took out my ear buds, and watched as the driver abruptly stopped and jumped out of his car to come at me.

“What are you up to out here?” he asked.

My eyes darted up and to the left as I pondered the absurdity of the answer that I, a grown man, was about to give to an officer of the law. “Well, you see, sir. I was running in the shape of a guy playing with a yo-yo. I had to leave the pavement over there and run through this here field because this is where the string to the yo-yo goes.”

It was too much. It was too ridiculous. I couldn’t bring myself to say the words I was thinking. I responded, “I was out for a run.”

“Which direction did you come from?” he replied.

“The little circle drive that formed my yo-yo, right over there,” I thought. But I replied (pointing north), “That neighborhood over there.”

“Okay. We’re looking for a suspect in the area. Have you seen anyone?” As it turned out, the police had shown up at a house nearby to bust a few drug dealers. A few ne’er-do-wells were arrested, but one feisty fella who somewhat matched my description despite being far less handsome decided to give the officers a little bit of excitement. He jumped out a window and fled on foot in my general direction. What are the odds?

Unfortunately, I hadn’t seen anyone. I probably would have seen him had I not been solely focused on running the correct path for GPS yo-yo man. In any case, once the kind officer had decided that I was not the suspect he was looking for, he hopped back in his SUV and sped off. I was free, but my app had paused during my conversation with the officer. The encounter totally messed up my yo-yo string. I was able to successfully complete yo-yo man the next day without any interference from the law. 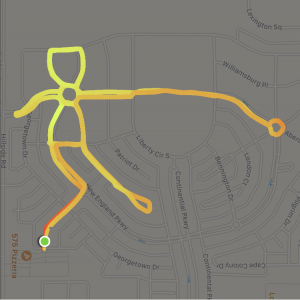 The remaining weeks of my training regimen proved to be devoid of criminal interference. I kept running around in ridiculous GPS shapes, but I mostly avoided plots of undeveloped land.

Then, at long last, race day arrived. I felt ready.

The first 19 miles of the Oklahoma City Marathon were actually pretty great. I felt fine. I had plenty of energy. I had read about a so-called 20-mile wall that runners hit—a mental and physical wall where many runners shut down—but I was beginning to believe it was a myth. At mile 19, I thought, “This is great! I should have run at a bit faster pace. I guess I’m not going to hit that wall everyone talks about.”

Then, just after mile 20, something changed. Bam! Wall. My brain was like, “Okay, body, you’re exhausted. Let’s slow down the pace, change to some upbeat music, and finish this thing.” My body was like, “Nah, better not. I’m done now. Brain stupid.” With bursts of starts and stops, I walk-jogged the last six miles before using the last of my energy to run across the finish line.

An overly eager race volunteer congratulated me on finishing and offered me a celebratory hamburger. Rather than accepting the burger or acknowledging his existence, I staggered a few more steps toward the loving arms of my wonderful wife and then collapsed onto the pavement, writhing in agony and finally guzzling a couple bottles of Powerade. My sweet wife helped me get to my feet and meander over to the first-aid tent where a couple of volunteers repeatedly stabbed my calves and thighs with tiny knives. In hindsight, they may have been massaging my legs rather than stabbing me. I can’t be sure. I was a bit delirious. As a husband, there are moments in your married life when your wife gazes upon you with pride, longing, and a bit of lust. This was not one of those moments. She had given birth six times and handled all six births infinitely better than I was handling one road race. We both knew it. I had finished the marathon, but I looked stupid.

This past summer when our family returned to Kenya, we spent a few weeks working with some of our favorite people and one of our favorite organizations, Christian Relief Fund. Our hotel was in the city of Eldoret, home of the Kenyan Olympic training center and thus some of the best runners in the world. It felt as though every Kenyan in the area was a born runner. One evening, we found ourselves sitting around the dinner table when the topic of running came up.

“Are you a runner?” one of our Kenyan friends asked me.

Knowing my audience, I answered proudly but cautiously, “Well, I did run my first and only marathon a few weeks ago.”

“Really? What was your time?” another Kenyan friend replied.

Both of my Kenyan friends immediately and simultaneously burst into laughter as if each knew what the other was thinking. “Oh. You’re not a runner! Kenyans can run it in half that time!

We all shared a good laugh over my marathon story and how my effort paled compared to virtually every Kenyan we encountered. The moral of the story: Josh Wood = not a runner.

There you have it. If you would like to read the rest of the book, including the rest of chapter 4, sign up below to be notified when it’s ready. Thanks!

For you runners out there: Amarillo Run Maps