As word has gotten out about our week, it has gotten a bit challenging to return all the texts, messages, calls, etc. Sorry, everyone. So, I thought it might be more efficient to use this blog for one of its intended purposes: update family and friends on our little world. For those of you wondering, here’s a synopsis of our last few days:

A little after 11pm on Monday night, Careese woke Isaiah up to have him use the bathroom before we went to bed. He was a bit disoriented and started walking the wrong way. Careese called him back toward the bathroom, and he started walking back in the right direction. When he had almost made it to the bathroom, his arms locked along with the rest of his body as he contracted into the fetal position and started convulsing. Careese held him as he continued convulsing and began foaming at the mouth. I called 911 and yelled our address at the poor, sweet 911 operator lady (Sorry, lady. You were great. I was not.). After a couple minutes or so of convulsing, he stopped breathing and went completely limp. Unresponsive. We turned his head to drain his mouth/nose, checked for a pulse, and yell-cry-prayed as his lips and face turned pale and blue. It felt like an eternity (but was probably more like a minute or two without breathing). Finally, he took a breath and his eyes opened. He continued breathing lightly, but stared off into space-unblinking and unresponsive to anything, cognitively. We counted out his breaths to the 911 operator. About this time the ambulance showed up. Amarillo EMS, I love you and your rapid response time. Isaiah remained seemingly comatose until we’d made it about halfway to the hospital. He still couldn’t make eye contact or acknowledge my voice (or anyone else’s); but, he began to cry. He was scared, which gave me much relief that his little brain was functioning again. Not too long after that, he slowly regained his faculties. First, he was able to very softly answer “No.” when the EMT asked if he was in pain. After an hour or so in the Emergency Room, he was able to make eye contact again, recognizing us and his grandparents. He started speaking again not long after that.

The next 24 hours were a blurry barrage of tests. Blood tests, EKG, MRI, EEG, CAT scan, etc. He didn’t get to sleep until about 5:30am, but was quite the little trooper throughout all the poking, prodding, sticking, and questioning.

Thankfully, all tests but the EEG came back normal. Since his EEG came back abnormal, we spent another day at the hospital before being released Wednesday morning (1/18). No diagnosis was made, but the terms “absence seizures” and “petit grand mal seizures” were used. We were told that our next stop would be a neurologist’s office, where we would get more information about the EEG and search for a diagnosis. We left the hospital hopeful and prayerful that the neurologist would help us with a diagnosis and subsequent plan for treatment. In the meantime, we were prescribed seizure medication.

Our Amarillo neurologist translated his EEG for us today. She confirmed that he had had a seizure during his EEG test. She informed us that he has general epilepsy and laid out some preliminary options for courses of treatment. She was great at her job and patiently answered all of our questions.

Tomorrow, we head to Cook Children’s Hospital for our appointment with a pediatric neurologist. We’ll get his take on the situation and determine a course of action from there.

Though we’re just starting to get answers and we may have a long road ahead of us, we’re so very grateful after, well, what could have been a much worse outcome. Isaiah is doing ok. He’s a bit unstable physically. We’re told this is a side effect of the medication. He’s also pretty apprehensive about the doctor appointments ahead of him, but he has a good attitude about them.

Fortunately for us, we find ourselves surrounded by some of the best people on the planet. Thank you all for the outpouring of love, prayers, food, texts, messages, calls, and support over the last few days. Isaiah woke up smiling yesterday morning in the hospital bed as he felt like one of the most loved kids around.

Lastly, many of you wonderful people have asked if we need anything. Here’s your answer:

No, thank you. We’re good. Just keep us on your prayer list. I do ask you to seek out someone you know who has a child or loved one who struggles with seizures. Write them a note. Give them a hug. Take them a meal. Write them a prayer. I sort of want to hug all of them. But, I can’t. May God use you to be an encouragement and a blessing to them. Thanks. To those of you who have or love someone who has struggled with seizures, may God bless you and make his face to shine upon you. Seriously. I don’t know how you do it. This is the only seizure I’ve ever dealt with in my life, and it wrecked me. 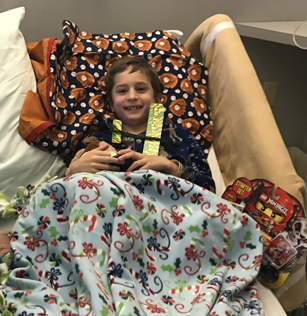 Previous post How to Listen to Audiobooks for free